Through the years, many wolves and wolf-dogs have called the sanctuary home. Some are very shy, others may grow to trust us in time, and then there are a few who open their hearts from the very beginning and share the honor of their friendship with us throughout their lives. Jasper was one such soul. Loss is never easy, and it is felt especially keenly when we lose such a close friend. Though we tried to prepare for this day knowing that it might come, one can never truly prepare for the heartbreak. On Wednesday April 13, with broken hearts, we said farewell to Jasper.

Jasper loved his human caretakers. He would do a playful bow and wiggle whenever any of his favorite people came to visit. If anyone was in sight but not yet close enough to reach him he would let out sorrowful howls and whines until they finally approached him to say hello. He never wanted to be left alone. From an early age, and throughout his life, his greatest desire was to have a companion and he was always happiest when surrounded by those he loved.

Jasper came to us as a young pup. He was nicknamed “Iron Jaws Houdini” after several escapes at his former residence caused his former owner to seek rescue at the sanctuary. He became a member of the “Penny Pack” with Rogue, Sky, and Liberty. All four loved to tousle and play together. Jasper was a member of the Penny Pack for many years and was especially enamored with the pack’s leading female, Sky. After some years, he and Sky had a bad breakup. It took us some time to find the perfect match for Jasper, that is, until we rescued Circe.

Circe was enamored with Jasper from the very beginning. It had also been a challenge to find a someone for her, but as soon as she saw Jasper through the fence, it was clear that she had found her match. The two spent a very happy year together. When Jasper began to not feel well, Circe was there for him to keep him company and cheer his spirits.
In February, we noticed swelling on the side of Jasper’s face after he had dental surgery. We immediately provided medications to treat possible infection while we scheduled him for appointments to determine the cause. After several tests including a CT scan and biopsy it was determined that there was indeed an infection present, but there was also cancer. We explored every potential treatment option but the cancer was deemed inoperable and the infection would prevent successful radiation treatment. The cancer was too aggressive. We did our best to make him as comfortable as possible until it became clear this week that it was time. With great pain in our hearts, we bid our dear Jasper farewell. .

Jasper has crossed the bridge. I will miss him deeply. The days pass, the sun rises and sets just passing sister moon. The cycle is complete and starts anew. It is a warm day, but the shade beneath the trees was cool and the breeze forgiving and gentle. Circe said her goodbyes and cooled her feet in the water. There was a grand howl as all felt the passing of our noble Jasper. Now all is peacefully still. The birds are chirping and the wetland creatures are singing an ode of the day. We will meet again my Jasper, but until that day I will listen for your bugle bay beckoning of melancholy notes across the sanctuary. I love you always. Dawn

Jasper was deeply loving with a light and playful spirit. Our hearts broke to say goodbye to such a dear friend, and the memory of his warm and open heart will be forever a part of us. 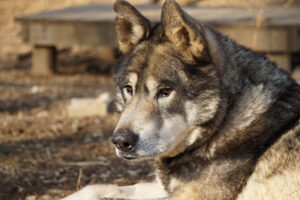