For many years those who visited the Wolves of Speedwell were enamored and awed by the Big Pack. This boisterous family was front and center for the tours and the unique personalities of each individual family member often lingered in the memories of those who had the chance to meet them, even once. Among the most memorable were the “L” boys: Levi, Lincoln, and Lucas. All sons of Lucky these three along with their uncle Frodo were always found in each other’s company. The years passed and age or illness began to claim members of this remarkable family until there were but two remaining, Lincoln and Levi. Time comes for all eventually, and this July Levi joined his family that had gone before him. Our hearts break knowing that such a bold and spirited wolf is no longer with us, but we take comfort in knowing that he is now at peace and reunited with his family once again.

Levi had a rowdy personality from the very beginning. He loved to show off his strength and dominance, especially with his brother Lenape. Though he flexed his strength, he still knew his place within the pack, and never challenged those elder members who he respected, especially Frodo.

Levi, Lincoln, Lucas and Frodo were always together and always ready for action. If there were new rescues on the property or activity in another pack, these four were always at the fence together, alert and ready to defend their family if ever there was a need, and there never was but nevertheless they were ready. They would run alongside the maintenance vehicles and paw at dirt to show that they were tough.

Through these many years the big pack declined, leaving behind Levi and his brother Lincoln. Levi was always strong, even until the very end. In the last few years Levi started to show his age and began taking supplements to help his joints and support his liver. He persevered, though, never wavering in his strength and endurance. The boys always spent time together and supported each other. Lincoln seemed to know his brother was slowing down and was more respectful of his space during mealtimes than in years past. When they were young, they might have quarreled over leftovers if one ate their meal too slowly but as elders they were respectful of the other, with merely a brief snarl to communicate if one or the other overstepped. They always communicated well and made their intentions clear with each other without ever feeling the need to escalate. They stuck together until the very end.
This July it became clear that the supplements were no longer helping Levi as they once had. Age had caught up with him. His mobility began to decline and he began to show signs that he was in pain. On July 27 we made the difficult decision to bid Levi farewell.

Levi exhibited strength and tenacity throughout his life. He was a big wolf with a big personality and he loved to show off. He was always lively and happy spending time with his brothers and he enjoyed being a memorable part of his rowdy family. He will be greatly missed by all who knew him. Farewell Levi. We will never forget your strong and bold spirit and the memory of your vibrant soul will be forever in our hearts. 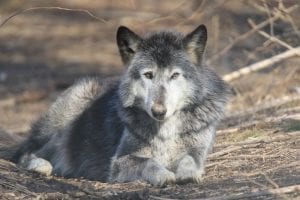