As with all our rescues we never know how long we will be blessed with their presence. There is never enough time, as it was so with our beloved Bear. Some losses take longer to process than others, and this loss has certainly taken its toll.

Bear came to us from a small roadside zoo. He smiled almost as soon as we placed him in the truck to come home to Wolf Sanctuary of PA. He won the hearts of his caretakers right away, with his vivacious personality. He greeted new experiences with an open honesty, exuberantly expressing either his pleasure or displeasure with any given situation or visitor. He could be mercurial at times, switching between being jolly and cantankerous, but he always seemed happy to come to the fence for attention from those he favored.

His first day moving from quarantine to his new territory brought him, and those of us who knew him, a great deal of joy. He jumped right into his new pond and began investigating and excavating all of his new surroundings. He was quite fond of excavating, and took special delight in sapling removal and tidying the inside of his shelters.

He enjoyed his life with us, and especially his time spent with his beloved Sophie. The two took to each other quickly during their introduction. Sophie was the perfect match for him. She would encourage him to play and chase her around but she could also hold her own if he got too rough. She was an excellent caregiver to him after veterinary checkups, making sure he exercised but also keeping an eye on him to make sure he didn’t exert himself too much. Even in his last month or two, when he began to slow down a bit, she kept helped to keep his spirits up and it was clear that her presence always brightened his day.

In December 2018, we began to notice a change in his behavior and eating habits. He was moved to quarantine with Sophie, on one hand to keep her company while she began treatment for heartworm, but also so that we could keep a closer eye on him. Despite careful observation his condition continued to worsen, and he was unresponsive to any treatments. It was a valiant effort put forth by him and all the staff members who cared for him in his final days. But as the days became weeks and test after test confounded us our Bear became weaker. With deep sadness and pain in our hearts we bid him farewell in January. We know our Bear was approximately ten, but he had such a vibrant way about him that this had to be more than his age, and indeed it was later determined that Bear suffered from a fast-spreading cancer.

Bear was a wonderful wolf to behold, strong and distinguished, and we are glad that he was able to spend a few happy years here with Sophie. He will be greatly missed by all who knew him. 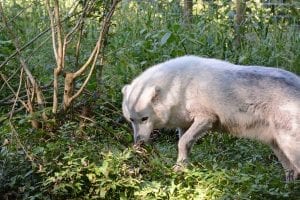 One thought on “Farewell Bear”