It can take a great deal of time to process the loss of a soul who was once such a beacon of light. We can look fondly on the memories but the pain of loss does not truly fade. So it was when, with great sadness, we bid farewell to our Dakota.

Dakota came to us quite young, just a few months old. He never lost his youthful spirit and was always ready to open his heart to a new friend. He was very trusting and playful and had an amazingly positive energy about him. After any time spent with him, his caretakers couldn’t help but come away with a smile in their hearts.

When it came time to introduce him with a new pack there were other young wolves we had in mind who had recently arrived as well. Dakota fell into the pack with ease but the one he truly fell for was Yellow Feather. Graceful and poised, Yellow Feather caught his eye from the start and the two quickly became an alpha pair. Soon after it became clear that they would be happiest if they started their own pack together apart from the others and so the two were moved to the territory where they lived happily together for many years. Dakota and Yellow Feather were always by each others’ side, deriving happiness and comfort from one another.

Dakota was always full of life, bursting with energy and radiating a joyful warmth. When caretakers approached his territory he would greet them with an open heart, wagging his tail and uttering a happy guttural howl. Yellow Feather was always suspicious of visitors, but with Dakota by her side she was more at ease, reassured by his steady and upbeat presence.

One November afternoon, Dakota became very ill. Usually filled with energy and vigor, he seemed fatigued and was showing more alarming symptoms as well. We ran tests right away and began treatments immediately, yet his condition continued to worsen and with deeply heavy hearts, we bid him farewell on November 26.

We love you Dakota, we will never forget your uplifting soul and memories of your bright, sunny, joyful spirit will always lift our hearts. 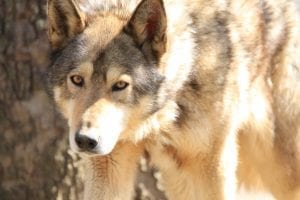