As we muster on through uncertain times, the gravity of loss brings a sudden clarity, and a grounding, with it’s deep sadness. The outside world falls away, and all that seems certain is the void left behind by those we loved and lost. Just after beginning a new year, with great pain in our hearts, we bid farewell to Aries and Lazarus. Our memories of the time we shared with them keeps us moving forward.

Lazarus’ strength and resilience was clear from the very beginning of his life. Born into the Big Pack, he was the son of Lucky, one of the five “L” boys. Soon after his birth, Lazarus became ill and was removed from the pack for treatment for a respiratory condition. After he was well again, he was unable to be placed back into his pack and was instead introduced to two other pups also in need of care, Hope and Aries. The three were quite the trio. Hope was the true leader of the three, followed by her brother Aries, and Lazarus was the omega. He seemed content to take fall in line behind the other two, and loved them dearly, especially Aries who would become his life-long companion.

Lazarus was rather shy compared to his pack-mates, having always had to wait his turn behind Hope and Aries for pets and love from the humans. Once he felt comfortable though, he loved attention just as much as they did. In his later years, when it was just he and Aries, he became even more affectionate with his human caretakers, trotting over to the fence excitedly to say hello.

After Hope’s passing in 2017, Aries and Lazarus took comfort in each other and their companionship. Lazarus still respected Aries’ leadership, but there was a warmth between them and a strong bond that would last their whole lives.

Lazarus carried himself with grace and always tread carefully both in his gait, and in his overall behavior. He had learned a sense of caution from his companions from a young age, and always seemed to assess each situation with a deep intelligence before making a move. Yet along with his sense of caution, he also had an open and warm heart, and a light and joyful spirit. He loved deeply and openly and despite his air of caution, he never seemed to show any element of fear.

Lazarus was strong, like Aries, but in a different way. As the years passed, Laz was the first to show signs of his aging. His muscles slowly deteriorated but he could walk, and his discomfort was managed. No pain was in his eyes. He was happy and he had his Aries always at his side. His cheery spirit and graceful fortitude carried him through. He was treated with pain medications as soon as he started showing signs of concern, and they seemed to help him for awhile. Yet, in recent weeks, his condition began to worsen and effect his mobility. As Aries condition declined rapidly as well, Laz too showed a sadness in his eyes that told of his growing weariness and discomfort. They now spent hours in their shelter and did not come out to great their human friends and family. As they lived, the choice was made to allow them to go together with dignity and the grace of their life. After consulting with our veterinarian, and after much deliberation, the difficult decision was made to bid Aries and Lazarus farewell on January 6.

Proud and as strong as any wolf that has come before or will come after. Born here on site to live a full life free of torment and strife. Our beautiful boys, what has happened to the time. You were just puppies and suddenly all grown up and grown to dignified aged wolves. How many years it is not enough I want you back. Do not leave me, us. As the tears flow, I know this is the right choice for you both, but in my mind a scream goes unsaid. STOP! Please stop! The vet asks are you ready, I nod yes. It is a lie. I am not ready; I am still not ready, and it is the next morning. I feel numb. I know I am not alone, the staff and volunteers and all the people who chose these fine beauties to be adopted into their families. We all share in this terrible and unfathomable loss. Solace is taken only in that they left together and crossed the great bridge together. Forever young and wild. Aries was always looking for a good ear scratch. He was always the first to share his opinion and let you know what you were doing wrong and when he was done with you, he would just walk away. Laz, he was much more reserved, and he always had this twinkle in his eyes. Both were and will always be beautiful and we will always be grateful that they shared their lives with us and allowed us to glimpse pure love. Missing you always. Run free and healthy my beauties.  ~ Dawn Darlington, President

Farewell Lazarus. We will never forget your bright spirit and the memory of your elegant grace will always remain in our hearts. 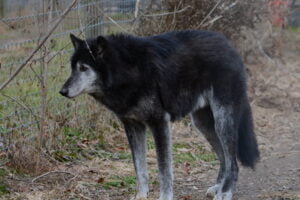