The whole world is upside down right now. Each day there is a reminder of the hardships and new burdens set upon us. With nerves already frayed, a loss of family has a particularly keen sting, as if a piece of your soul has been stripped violently from you. On Wednesday June 17, our hearts wept as we bid farewell to Chomp.

Chomp was born into the Big Pack. One of three sisters, she grew up in a loud and boisterous family. For much of her life, Chomp took on the role of Omega, while her sister Trinity lead as Alpha female and her sister Sarge took the occasional opportunity to overthrow her. Chomp’s sisters made sure to remind her that she was to submit and fall in line, but that never kept her spirit down. Chomp was full of energy and loved to goof around. She would wag her tail with excitement when it was time for the pack to howl and would make sure to whine and scurry up to the higher ranking pack members in the hopes that they might begin to howl allowing her to joyfully throw back her head and chime right in!

Like the rest of her pack, Chomp had no interest in human interaction, and she often shied away even more so than her other pack members. During snacks or treats at the fence she knew her place towards the end of the line behind her family members and would chomp her treat quick as a flash to make sure no one thought of stealing it.
As she got older, Chomp took interest in rising the ranks of the pack, though it was only for a short time. As the rest of the pack aged as well, they all grew tired of the pack politics and seemed to just enjoy spending quiet afternoons with one another and relaxing in the shade.

Chomp aged gracefully. Her coat changed from a deep black in her youth to various shades of black, white, gray, red, and brown from her head down to her long and elegant tail. She took care to maintain her appearance and always strove to maintain an air of dignity, no matter what challenges she faced.

In the winter of this year, at Chomp’s checkup, we discovered a mass obstructing her throat. At the time, the mass was small and inoperable due to its location and she had shown no sign of symptoms that would indicate that it was bothering her at all. We had hopes that it might just be a fatty mass and that it might stay the same size, but after a few months, we noticed a change in Chomp. She began to slow. She was not her lively and bubbly self. She took opportunities to sit or lay while the rest of the pack was standing and she was not keeping up with them like she used to. Yet she maintained her dignity all the while. She laid with her head held high, right alongside her family. She knew her limits, though, and something had clearly begun to affect her. She was not eating well and was continuing to decline. As her condition worsened, our veterinarian came out to see her and upon examination we found the tumor had grown to nearly completely restrict her throat. With heavy hearts, we made the difficult decision to bid her farewell.

Chomp had a vibrant spirit. She had a way of brightening her pack with her joyful play. She was filled with a lighthearted resilience and always had a cheery energy about her even in the face of adversity. Farewell our beautiful Chomp. We will never forget your uplifting spirit and the memory of your elegant grace will always remain in our hearts. 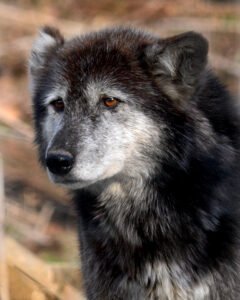