We share our hearts and souls with those we love and when they leave a part of us goes with them. So it is with our sweet Rogue. His easy, loving friendship will linger with us always. For now we grieve at the loss of our gentle giant with the biggest kind and loving heart.

Rogue was shy but also sweet and affectionate with those he trusted. He came to us in his younger years, large and strong, but also timid. He grew to trust some of his human caretakers who he developed close bonds with and he would love when they came to visit.

Soon after his arrival, he became part of the “Penny Pack”. He loved to play and tousle with his pack-mates, especially Sky who he shared his later years with. Though he was one of the largest members of the pack, he always deferred to Sky and respected her leadership of their pack. He loved to play with his pack-mate Jasper, but if Jasper and Sky would become too rough, he would typically keep his distance unless a gentle persuasion was needed to stop the argument, but never did he start an argument. He preferred a more laid-back playtime and was never very interested in conflict.

Rogue always had an easy joy about him, and was just pleasant to be around, which seemed to hold true with his pack-mates and human caretakers. He was genuine and true, and always clear with his feelings, whether he was nervous or excited or playful or peaceful.

As he grew older, it became clear that he was having increasing pain in his back and legs. His pack was moved from their hillside to a flatter area, which seemed to help him regain some of his playfulness and energy for several years. He would run through his area with his pack-mates and bound to the fence if any of his favorite humans were approaching.

In recent months, his pain and ailments increased. The vet determined that Rogue had a degenerative disc disease in his spine. He was on medications to manage the pain, and despite increasing the medications, his condition continued to decline impacting his quality of life. After consulting with our veterinarian, the immensely difficult decision was made to bid him farewell on October 30, 2020.

Despite his pain and struggle in recent months, Rogue never lost his strength of spirit and continued to greet his caretakers with excitement and joy, especially during breakfast. His spirit was also lifted by Sky, who kept close watch over him when he wasn’t feeling well and spent her days by his side. Sky was even seen singing to him on his lower days.

Farewell Rogue. We will never forget your sweet gentle nature and the memory of your lighthearted spirit will always remain in our hearts. 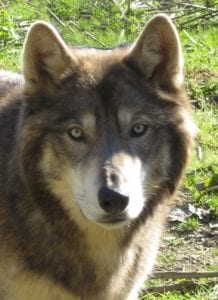