Over 40 years ago the sanctuary began. One man and one woman welcomed wolves into their hearts. Over the years the sanctuary has grown and a team now stands ready to offer sanctuary to many. We flow like water to and fro. Lives come and lives move on to the next plain. This flow never gets easier, alas it seems to take a bigger toll each time as though too many of our pieces have fallen away. It takes a great deal of time to heal with each loss, and the grief begins anew with the loss of such a beautiful soul that graced our world. So it has been with our dear Swayze. On May 20, 2020, with deep sadness and heartbreak, we bid our Swayze farewell.

Swayze was born to Smokey and Samson. He was one of five siblings with his sixth sibling Solo following the year after. Smokey’s Pack always had calmness about them. Each family member seemed to exhibit a great deal of respect for each other and everyone knew their own role in the pack. Swayze was no exception. Calm, cool, and collected, he was content to take a backseat and let his siblings Dusty and Solo take over the leading roles of the pack after their parents passed on. He was tall and strong and overall much larger than his brother Dusty but it was clear that he had no interest in leading the pack in that way and instead took on his own role in the pack, right at the middle.

Swayze was stoic and noble. He had a strength and a peace about him. Most of all, he enjoyed spending time with his family, especially his sister Cinderella who he spent his final years with. In the afternoons, Cinderella would make sure that he took his daily exercise around the enclosure and he would follow her on her walks, just a few paces behind.

Like the rest of his family, Swayze was shy of humans and preferred no contact or interaction. While some of his other siblings would come up to the fence for food and snacks, Swayze often stayed a few paces back. He preferred to maintain his independence and the serene wildness that was unique to him and his family.

Over the last year, Swayze began to show signs of his age. He suffered a minor stroke last summer but slowly began to recover, possibly in part due to Cinderella’s care and attention and also due to Swayze’s own willful determination. This summer, though, his condition began to decline rapidly after he suffered another stroke. After much careful and difficult discussion, we bid Swayze farewell on May 20, 2020.

As Swayze aged he took on a timeless elegance and his strength never wavered throughout all of his life. He loved being a part of his family and always treated each of them with loyalty and respect, as all of Smokey’s children did. Swayze taught us about what it means to be a part of a family. He showed us that there is strength and honor in every role in the pack so long as you live each day with peace and fortitude.
Farewell Swayze. We will never forget your dignified presence and the memory of your noble spirit will always remain in our hearts. 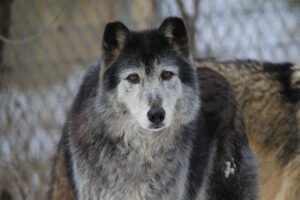