Many visitors who walk through our gates are captivated by one or several of the Wolves of Speedwell. Perhaps none captured the hearts of our visitors more than our beloved Thor. At 19 years of age Thor has gone on to be with his family and life-long companion Lucky. Our hearts wept at the loss of a magnificent soul, yet we are grateful to have had the chance to know such an amazing wolf. He lived a very long and full life here and the memory of his strength, resilience, and nobility will forever be in our hearts.

Born as a member of the Big Pack 19 years ago, Thor grew up with his siblings Hudson, Geronimo, Winston, and Murphy. He always exhibited strength, even as he was growing up. At a young age he developed cataracts and began to experience vision impairment. As the Big Pack grew, and as his younger nephews began to come of age, it became clear that the Big Pack was no longer the best environment for Thor. It was around this time that he was moved to a neighboring territory with a female wolf also from the Big Pack – Lucky. This was just the start of a long and close companionship.

Thor and Lucky developed a strong bond with each other over the years. Lucky would always run to get him with her tail wagging when the tour was about to begin to encourage him to come to the fence. She protected him and always stood by his side. When she passed away Thor missed her deeply and howled for her in the afternoons for many months.

Thor carried himself with an air of nobility and he had a stoic presence about him. A true example of strength and perseverance, he adapted to any challenges that he faced over the years. He was incredibly resilient, and never seemed to let any sort of hardship get him down. Despite his early vision loss, he was able to navigate his entire 2-acre forest with no difficulty and knew every branch, rock, or vine in his path. As he aged he kept up his routine of walking that path several times per day, and he especially seemed to delight in walking through during tour time to the delight of his many visiting admirers. 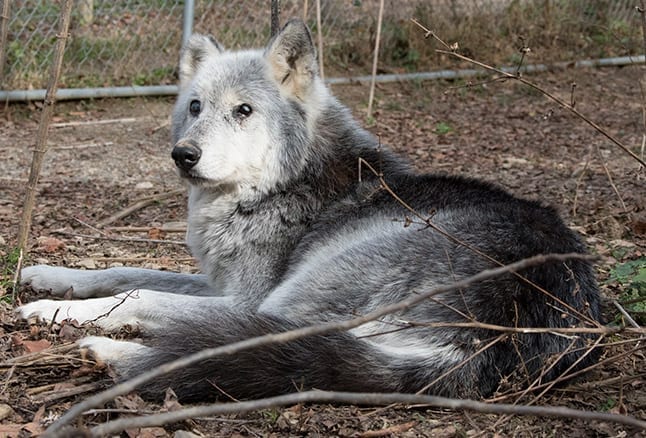