Some souls are with us for a long journey, others for a very short one, though we always hope that it can be longer. None of it is fair or just yet we remain with an emptiness that we cannot quite reconcile. Our sweet Bodhi left us far too young and far too soon.

Bodhi was elusive from the start. When he arrived at the sanctuary he evaluated all new sights, smells, and spaces with caution – a true wolf at heart. He was curious but always at a distance preferring to assess from afar.

After a brief time alone, he was introduced to Little Girl and the two seemed to get along well together. They had both been with other companions before with whom they had been more closely bonded, but they seemed to regard each other as suitable roommates and enjoyed spending time in each other’s company. They could often be seen relaxing near each other in the shade of their forest home. On some rare occasions, if they didn’t know we were watching, we might catch a glimpse of Bodhi goofing around and showing off to try to catch Little Girl’s attention and get her to play with him. It was these quiet moments, when all was calm and no one was around, when his true personality shone brightest.

In Spring 2021 we noticed that Bodhi had started exhibiting a limp in his rear leg. After corresponding with our vet we began treating him for inflammation and pain, yet his limp began to worsen. We made the decision to move he and his companion Little Girl to a flatter area which would be easier to navigate than their usual hillside, and scheduled him for a CT scan to determine the cause and ideally schedule follow-up surgery or treatment to help him. He seemed to feel a little better following the move, though he was still elusive as always. However just a few days before his scheduled CT scan, he began to decline. He had trouble getting up and moving his rear legs. We rushed him to emergency where he passed before further treatment or exams. We later determined that he had been suffering from a large inoperable tumor in his abdomen that likely had grown rapidly in the last few weeks.

Our dearest elusive Bodhi, we bid you farewell. You were a joyful, mysterious soul and the memory of your calm and independent spirit will be forever in our hearts.
. 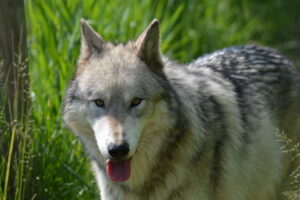