Some stories end before their time, and these are often filled with heartbreak. So it was when the sorrowful day came to bid farewell to a joyous, playful, and loving member of the Speedwell Family – Downingtown Dozer.

Downingtown Dozer, or D. Dozer for short, came to the sanctuary just under 5 years ago. His story began as it ended, as part of a story of true love, the love between he and his pack-mate Vada. Vada arrived shortly before D. Dozer, and before we even knew him, she gave us an idea of what a wonderful animal he was. Her love for him was made known as she howled throughout the day and night, pining for him until his arrival when they were once again reunited. Once he finally arrived, the two were inseparable. Vada has always had a high energy level and D. Dozer’s laid back demeanor balanced her spirited playfulness perfectly. The two loved to play together, and even when D. Dozer began to slow down a bit, Vada was always by his side. She will miss her mate deeply.

D. Dozer carried himself with a noble poise, though he had been known to have spurts of energy and playfulness as well. He delighted in attention from his human caretakers though always on his own terms. During mealtimes he and Vada were both mounds of energy until he finally settled down to feast on his meal by his favorite log. He greeted all with an open heart and a sweet warmth. He will be greatly missed by all those who knew him.

In June 2021, our sweet boy started having brief episodes of lameness which lasted just a moment or two, and afterward he would recover and appear normal. We took him in for an MRI but nothing was found. In consultation with our vet we had him on a treatment protocol for his symptoms. However, rather suddenly in late July he began to decline rapidly and we took him for further tests. His CT scan showed a large mass in his abdomen and there were several other areas of concern. Biopsies were done and he was diagnosed with lymphoma. He continued to decline and though it pained our hearts, we knew the time was upon us – we took him from quarantine back to his forest home and his beloved Vada for one more evening before we bid him a final farewell.

D. Dozer was a wonderful wolf-dog, full of liveliness and love. Farewell D. Dozer. We will miss your warm and joyful heart and the memory of your sweet and loving spirit will be forever a part of us. 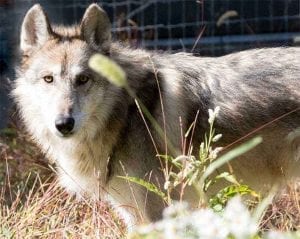