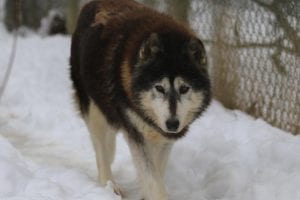 When Destiny met Chipper during the first week of June in 2012 there was magic in the air.  They took to each other right away.  As we watched them together we saw a beautiful combination of admiration and dedication between them.  Destiny was often very shy of human interaction, but Chipper taught her there was nothing to fear and after some time together, Destiny even began coming to the fence for treats during tours as long as Chipper was by her side.

When Chipper passed away there was no place for Destiny to roam.  The love of her life was no longer there and life became unbearably lonely.  Doctors say wolves like humans sometimes pass on from a broken heart, and that is exactly what happened to Destiny.  She could not accept being alone, so as the wind howled through the night she just went to sleep and reunited with the love of her life, to howl and play once again with Chipper.

“Dear Destiny, you were so much a part of our lives right from the moment you were born, especially mine.  As a newborn you were so small that we wondered if you would ever grow up to be big and strong.  You fooled all of us and your dad and mom, Kojak and Thunder, helped you to learn all about life and freedom which they explained happens only to those wolves who are loved and given a chance to live and grow with a bright future.  We will miss you so much in our lives but you made a special place in our hearts and you will forever be remembered as the lovable little one who grew into a beautiful adult, who finally knew the happiness there could be in this life.  You moved on to join the mate you found you could not live without!  Our lives have been changed with your leaving but we will listen for your happy howling with your mate in the distance and forever you will be in our hearts.  Farewell, my little Destiny, so happy to have had the privilege of being a part of your life!  You will not be forgotten!  You were special and loved by many and your life was a blessing to have been a part of.  We thank you for that!  Good-bye my Destiny”

IN MEMORY of DESTINY of SPEEDWELL