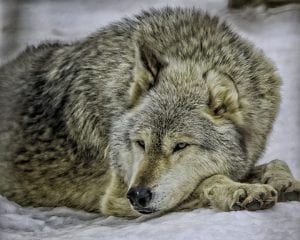 Merlin came to Wolf Sanctuary of PA with his family on May 05, 2006.  It was a warm spring day.  Along with him came his mate Niksa, her sister Keisha, and a wee baby of two weeks named Tioga.  For the first few days, Merlin and his companions were afraid to leave the small area of concrete in the very front of their enclosure because they had never experienced anything larger.  It was not long, though, before they adjusted to their new, large forest home at the sanctuary, and Merlin was transformed from a fearful apprehensive animal into a loving, happy, and strong alpha wolf.  He especially enjoyed running around his territory and playing in the snow with Niksa, Keisha, and Tioga.  In the summer he enjoyed running and hiding in the tall grasses.  He finally had understood that freedom was the way of life that belongs to each and every wolf.

Merlin was a true alpha male, and through watching his behavior, the volunteers learned more than they ever thought was possible about wolf behavior and the social values of the pack.  Merlin was always seen with his tail held high in the dominant position to designate him as the alpha.  He taught his son, Tioga, to know his position in the pack.  During feedings, he always ate first, as alphas typically do, and he certainly had the appetite of a wolf, once eating over 25 lbs of deer meat in one sitting!  He was a strong and noble leader, and though he was smaller than his son, he held uncontested reign over his pack, and lead his family with authority and affection.

Merlin was a very special member of our packs and his passing will be difficult for all at the sanctuary, wolves and humans alike.  Merlin had a very special human friend and they spent hours of fun and loving times together, right until the end.  We thank God for allowing us to know Merlin and to be a part of his life here on earth.

As winter approaches, and the wolves at the sanctuary howl to celebrate the coming frost and snow, a deep strong howl will be missing from the chorus–the howl of the one who taught us the true meaning of the word “alpha.”  We take comfort in knowing Merlin is at peace, and can once again play in the snow with his pack, Niksa and Keisha, letting out that alpha howl of his.

“Dear, dear Merlin, you spent many wonderful hours with us and for that we thank you.  You were loving with your family and you taught us so much about love and caring.  You were a strong alpha wolf who knew the value of family and love and you lived your life in a special way that will remain in our hearts forever.  You will be missed but wherever you are now, we know you are running with the wind and being more free than ever……When the snow falls we will be reminded of how much you loved trying to catch the snow flakes.  You showed us that the way of the wolf is a wonderful and exciting life and we will hear you when the wind blows and the trees rustle their branches.  We will watch for the trickling of the water as the stream flows over the stones and you will be remembered.  Farewell my wonderful friend and may you always know wherever you are that you were a shining light to brighten the earth with love.  When the sanctuary rings out with the howling of the Speedwell Wolves, we will listen for your alpha voice and we will remember!”