We are beyond thrilled to announce that Watonie has once again been reunited with her pack mates, Running Bear and Achilles! She has been through quite the ordeal but her joyful reunion with her brothers is more than we could have ever hoped for. Veterinary surgery such as what Watonie underwent can be incredibly risky and Watonie’s strength and resilience helped to pull her through.

Watonie arrived at the sanctuary in June 2011 nervous and scared at just a few months old along with her siblings. She was always a shy beautiful soul. She lives with her brothers Running Bear and Achilles and they live a happy and simple life in their forest home away from the world and the many dangers that forsake so many of their kind.

In late September 2020, we noticed that Watonie was not quite herself. She had a minor limp for a few short days, and then it quickly went away leading us to believe that it had healed. Three days later she was limping again. When she would not come out to get her dinner, we knew something was wrong and went in to her enclosure to look for her. Watonie was never a big fan of her caretakers being too close. She has a few favorites but overall humans are to be seen only from afar. We spotted her sitting very still and looking worried. As we approached, our mere presence inside her enclosures was enough to make her move, but when she stood up to move away it was obvious she was in a lot of pain. Wolves are experts at hiding their ailments, so for her to be visibly in pain, we knew there was something very wrong. Her rear legs were both shaking, and she was hunched in half with her tail tucked under. We made the decision to capture her first thing in the morning as it was already nearing dark. In the morning, we set up a fence at the lower end of her enclosure which funneled into a small lock with a roof. Six of us maneuvered her into this smaller area and from there scooped her into a crate. All in all it went very well. Her brothers stayed far away not wanting to be part of the capture.

A complete ovariohysterectomy was performed, and her incision healed quickly without complication. However, she still had the two failing ACLs. We knew that left untreated, she may live for a few months, but she would eventually succumb to the pain and lose the ability to walk. She was only nine years old at the time. To avoid a slow decline, we wanted to give Watonie a fighting chance and to keep the separation from her pack at a minimum we opted to do a bilateral CBLO. She then went in for her bilateral ACL surgery on Tuesday October 20, 2020. At that time, the veterinarian discovered a torn meniscus in one of her legs, which was also repaired during her surgery. After 5 hours of surgery, she was brought back to the sanctuary quarantine area to recover.

The surgery was long and we knew the recovery involved many more weeks of pain and separation, but Watonie is stronger than we could have every imagined. She remained calm and stoic throughout her recovery. She tolerated her physical therapy treatments peacefully and grew stronger every day. Though we kept hope in our hearts, there were many worries after the surgery – worries of infection, and implant rejection, physical exhaustion, and mental depression from being removed from her pack. As the days passed she continued to heal amazingly well. Though she was sad and howled in the evening for her pack, she never became depressed and she continued to hold on to her spirit. We stayed by her side and worked with her daily tracking her recovery. We wanted to do all that we could to give her every opportunity to grow older gracefully.

This video is a one minute clip from one of her physical therapy sessions. Keep in mind that she is fully alert (not sedated) for this session. She is wearing a soft cone to prevent her from damaging her incisions after her surgery and she has a small towel draped over her eyes so that she was not nervous during the treatment. She remained relaxed and calm as her caretaker gently stretched her legs to help her begin to build up strength and movement as she worked towards recovery.

During this time, we also reached out to our supporters asking for donations and we were amazed at the response. Thanks to the generosity of many of our kind supporters, we were able to raise over $6,000 for Watonie’s surgeries and recovery. We are so grateful to each and every person who helped during this time, whether through monetary donations, or contributions of comforters to keep Watonie comfortable while her legs healed, to kind words of support. Your help meant the world to us, and to Watonie.

Watonie continued to grow stronger with each passing day, and by January 2021 we were able to move her from her indoor recovery area to an outdoor recovery area alongside her packmates, Running Bear and Achilles. The area was partially on a slight incline so that she could get used to walking up and down hills again in preparation for her return to her woodland home next door. She grew stronger every day. We installed a heated shelter for her inside her area since she was still growing back her fur on her rear legs. Since she was returning to life outdoors in a much smaller area than she was used to to start, we also installed a blind to give her some privacy should she desire it. Her pack visited her each day and she could once again join the howl alongside of them rather than by herself indoors. She continued to amaze us with her patience as she worked to build up her strength yet patiently waited until she was ready to be let back in with the pack. 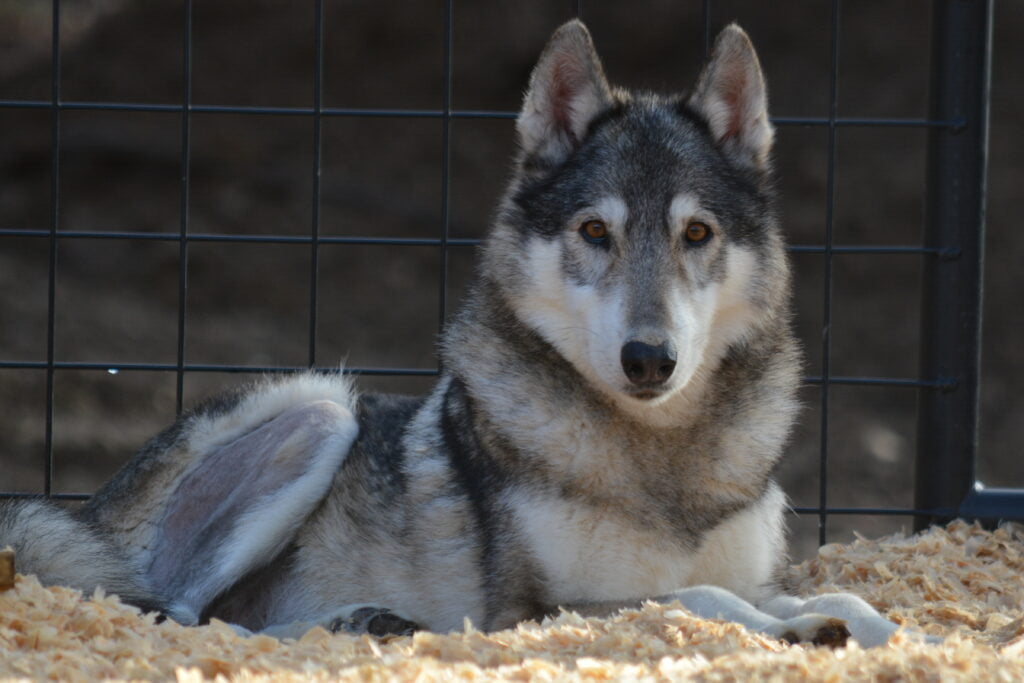 As time passed, Watonie improved more and more each day and it was finally time. On March 1, 2021, after 5 months away from her pack-mates, Watonie was reunited with Running Bear and Achilles. After a brief sprint around their area, the three shared happy kisses and tail-wags.

Thank you so much again to all those who supported Watonie through this ordeal. We continue to keep a close eye on her and we are happy to report that she is still doing amazing with her family in their forest home.

6 thoughts on “Watonie is Reunited with Her Pack!”