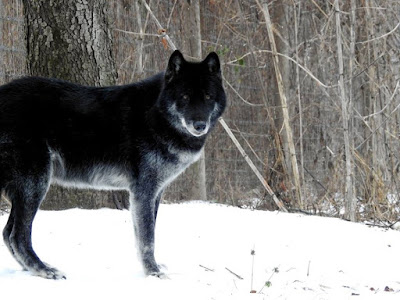 Winter has not yet begun to deepen and sorrow struck the sanctuary this January.  Nestled in the shade of her favorite tree, our Sage passed on to be with her ancestors on the morning of January 22, 2017.  Two dominant females in the Big Pack, Trinity and Sarge, signaled the loss of a sister in spirit, howling to mourn the passing of a fellow strong female.

Sage had a troubled past but shortly after her arrival she quickly became one of Speedwell’s own and in just one short year she touched the hearts of visitors and volunteers alike.

Sage transformed into a strong and fearless female wolf during her time here.  Upon first arriving here she was frightened and unsure.  All she had known in her past was a tight collar and a short chain.  Her first step into a new enclosure revealed her true nature, though.  No longer collared or caged, she rejoiced in her new freedom and the years of confinement melted away.  Yet there was still a trace of fear when visitors came by.  She was still uncertain and while alone, she was not yet ready to trust.  Soon, though, that was all to change.  She was introduced to a sociable male wolf named Galahad who had been her neighbor for quite some time.  Too proud to show him any more than a passing glance, and he so set in his lone wolf ways they were not playful like many of the other packs at the sanctuary.  Yet there seemed to be an understanding between the two and they each seemed to derive a sense of comfort from the other’s presence.  Sage was no longer fearful when visitors came for tours.  True, there were some that she would never trust, but Galahad did not show fear and so she did not either.

Sage developed a rivalry with a neighboring female wolf named Jake.  Both strong and dominant, they each made sure that their presence was known.  The two could be heard howling back and forth toward each other along the fence in challenge during times when all of the wolves would sing together.  Sage’s howl was unique, bold and raspy when she wished to announce her presence, and sometimes deep and solemn when she preferred solitude.

She was timid with her caretakers, and they were always overjoyed when she would show them her trust by taking a treat through the fence during a tour, or brushing along the fence beside them.  She still was never very social, not like her companion Galahad, and preferred a gentle solitude in the shade of her most favorite tree, out of sight and at peace in a forest territory all her own.

Be at peace, dear Sage.  Your strong and gentle soul will remain in our hearts and you will always truly be one of Speedwell’s own. 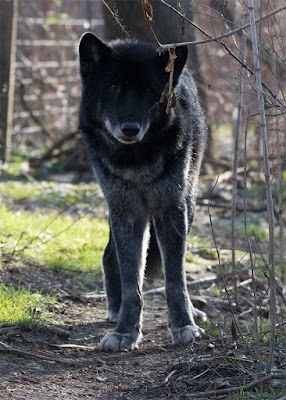 IN LOVING MEMORY SAGE OF SPEEDWELL